with specific reference to Skitouring and Freeride

Since the 2000s, the use of carbon fibers in the construction of skis and snowboards has spread considerably in all categories: piste skiing,  race, freride, ski mountaineering. This phenomenon has led to some advantages in the technical characteristics of the skis, but there has also been some  exaggeration, largely due to  fashion and the marketing policies of manufacturers.
In this article we focus in particular on skis and snowboards for ski mountaineering and off-piste use, trying to unveil   the pros and cons of carbon fibers.

STRUCTURE OF A SKI OR SNOWBOARD
A ski or snowboard is basically a beam subjected to longitudinal bending (flex) and transverse torsion loads. To make it simple,   flexion is induced on skis for example when the we lean forward on the knees at the beginning of a turn, or when we pass on a gutter or between two bumps. 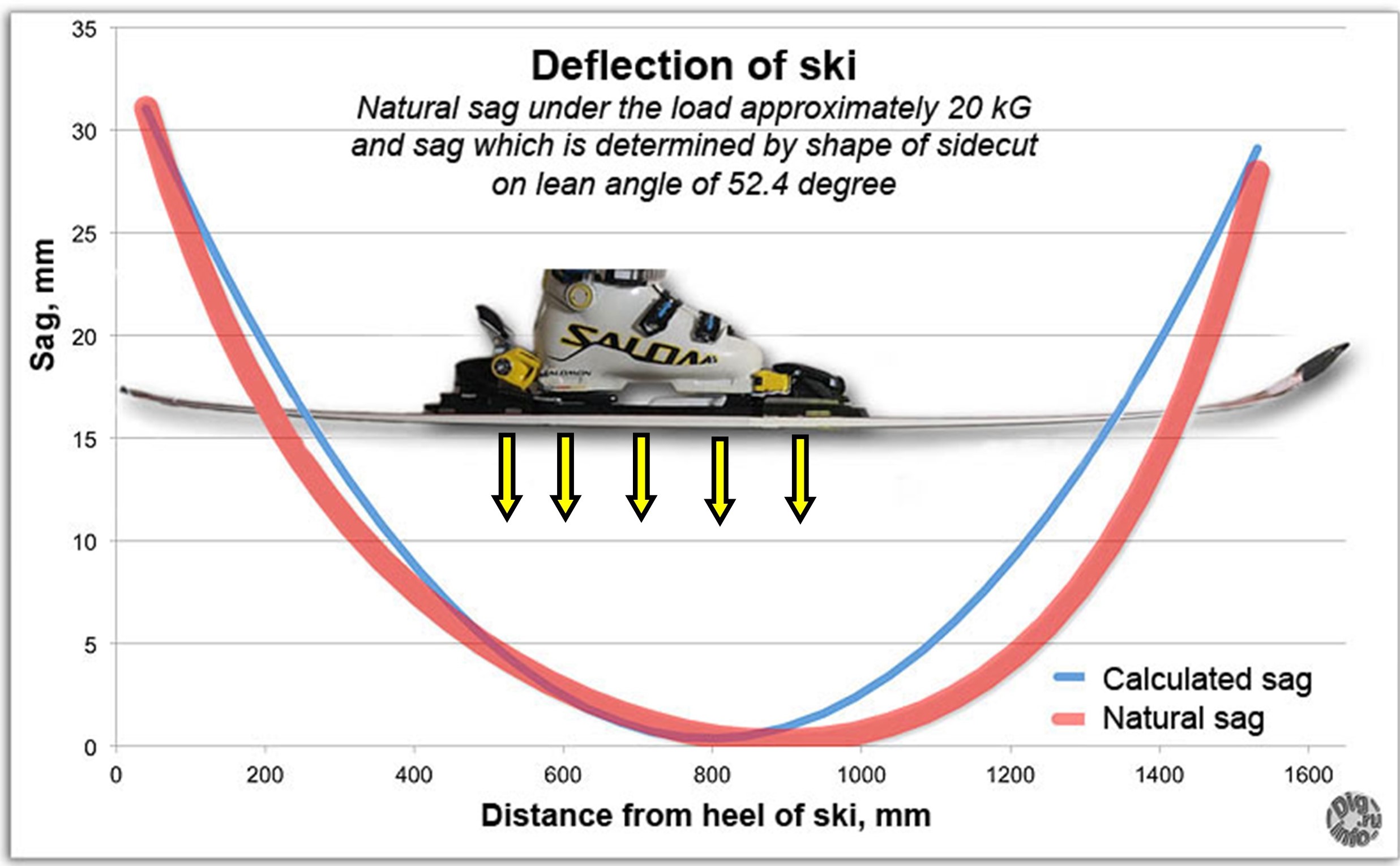 Torsion, on the other hand, comes into play especially in the diagonals and during the turns, when  the edge of the ski or snowboard grips to the snow surface and the skier counteracts by twisting the knees. The higher the turning speed,  or the greater the diagonal slope, the higher the torsional load applied.

Torsion on skis while gripping on the edges.

The construction of the ski (shape, structure, and choice  of materials) will be defined by the designer according to the desired characteristics of flex and torsion. Manufacturers have sophisticated methods of calculating the stresses and strains  of the ski or snowboard under load, and also carry out experimental test both at lab and on field.

In the so called  sandwich construction, several layers of different materials are arranged, as shown in the figure below. Normally  two sheets, one upper and one lower,  wrap around the core (middle  part of the ski) and provide the desired flexural elasticity, and to a lesser extent , the torsional elasticity. In the figure these two sheets are indicated as “Torsion Layer” (upper) and “Base Layer” (lower). In order to build a stiff ski, the distance between the two sheets should be increasaed (obtaining a greater flexural moment of inertia) with the obvious limit given by the total thickness of the ski or snowboard.

Cross section of a ski of sandwich construction. Source: Kunspiste.

These sheets are generally made of carbon fabrics, definitely to be preferred in ski mountaineering use,  due to their lightness- Alternatively, basalt, or Kevlar fibers are uses,  or  metal alloys such as Titanal (a special reinforced aluminum alloy) or titanium alloys.
Basalt fibers offer intermediate stiffness between Kevlar and carbon, a tensile strength almost like Kevlar, but higher density (weight). Kevlar fibers absorb vibrations much better than carbon, but they are weak in compression (so in the flex of the ski the top sheet could form cracks or buckle due to instability).
Composite fabrics are generally made by the manufacturer by drowning the fibers in epoxy resin (matrix) or other resins, as shown schematically in the figure.

Carbon composites fabrics are supplied in the form of sheets, or tapes, where the fibers (of the long type) are intertwined at 0 ° -90 ° (to provide bi-axial strength) or at 0 ° -45 ° -90 ° (tri-axial strength), or according to more complex textures, then incorporated into an epoxy resin matrix and finally cured  in oven or autoclave.
The mechanical characteristics of the composite can be defined at will by the designer, varying the type of fibers and the matrix, the mutual percentage of fibers and matrix, the texture, and the polymerization process (temperature and duration of the curing process, possibly under vacuum). 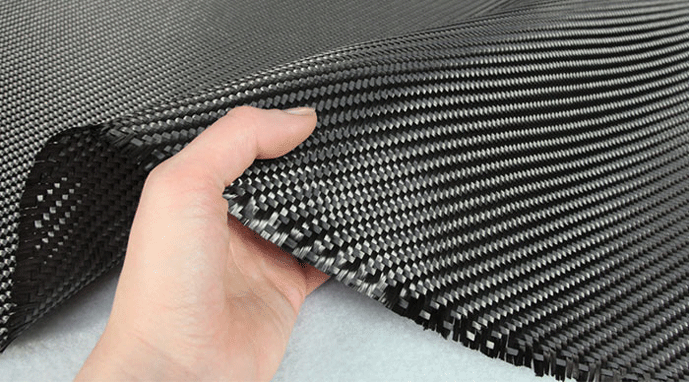 A carbon fiber fabric, before the impregnation with the resin. Source: Vac Aero

For the core of skis and snowboard of the middle and high range,  longitudinal strips of two (or more) different woods are used, glued together as shown in the figure below.  The function of the core is to make the ski less nervous in flexion and to absorb vibrations; wood is an exceptional material for this purpose. 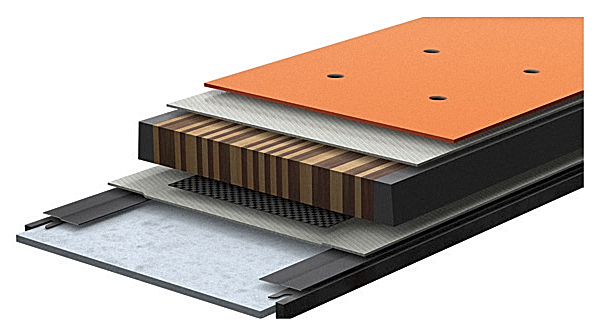 The manufacturer will choose the suitable  type of wood for the desired characteristics. Among the most used timbers: ash, aspen, poplar, maple, or more recently paulownia (karuba) and bamboo for lightness. Manufacturers do not stop looking for new timbers, even special ones, such as the Sitka spruce, at the top in terms of stiffness / weight ratio.
However, there are other solutions for the core, for example the honeycomb, a complex structure in aluminum alloy or aramid, that offers high rigidity yet being very light.
For low-cost skis and sbowboards,  polyurethane foam is a very common material for the core. 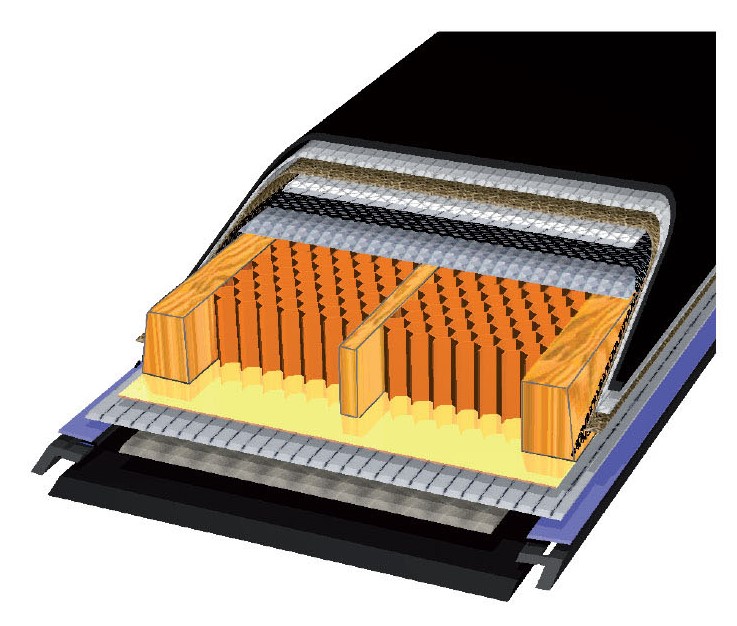 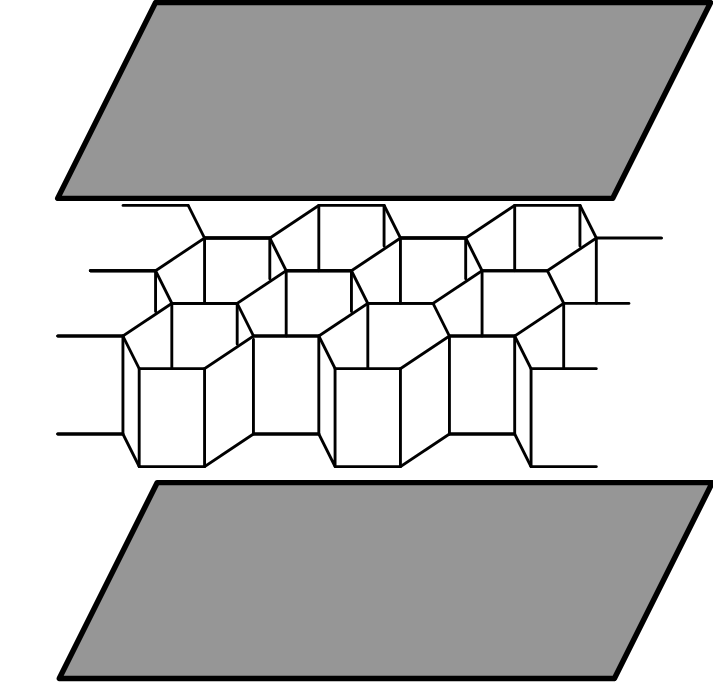 The sandwich construction is closed by the sides of the ski (sidewall) which must have at least three functions: give the necessary torsional stiffness,  provide a solid support to the edges, and  protect the skis during use. The most common material for the sides is ABS, a high-density thermoplastic polymer that offers the required characteristics, against , however, a rather high weight. 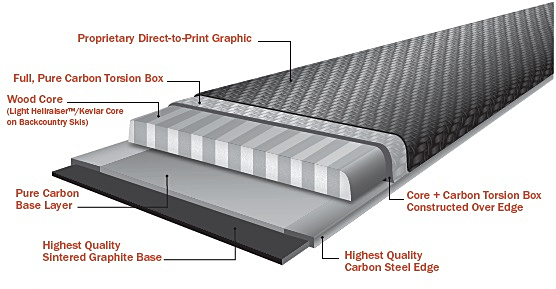 Cap construction:  the upper shell (“Full Pure Carbon Torsion Box”) wrap the sides of the ski down to the edges. Source:  Goode.

To complete the construction, in addition to  the upper and lower sheets, one or more layers (or wires or tubes) of ad hoc material are inserted for the absorption of vibrations, then a metal sheet is included to support the area of ​​the screws of the bindings, then the ski base, and the top sheet (upper finish of the ski or snowboard with relative graphics).
Carbon fibers, if used as mentioned above, are an excellent choice to provide  the desired flexural stiffness and contain the mass of the ski or snowboard, also considering that they can be inserted exactly where the designer requires it, to a variable extent on the length of the ski.
Alternatively, glass fibers were used extensively before the spread of carbon technology, and are still present in mid- and low-range skis and snowboards today. Of course, glass fibers fesature  significantly lower mechanical characteristics and greatly increase the mass of the ski.

Carbon fibers are therefore an extraordinary material for the construction of skis and snowboards, provided that they are used only where needed and to an appropriate extent, without exaggerating, and this for at least three reasons:
a) for the optimal dynamic response in flexion it is useful to have a partial collaboration of the wooden core, especially when  a less nervous ski is wanted;
b) the total mass of the ski or snowboard should not fall below a minimum threshold,  which depends on the mass of the skier and the type of snow and terrain: a ski or snowboard that is too light does not have sufficient inertia to contain the range of motion of the dynamic response, and a lot of stability is lost, especially at high speed (this consideration does not apply to ski-mountaineering racing skis, where lightness is paramount);
c) carbon fibers do not absorb high frequency vibrations (typical of skiing on hard snow), therefore they transmit the vibrations  in part to the skier, so that skiing becomes imprecise and also tiring at the end of the day.

On point c) a clarification is needed. There are many publications (especially on the web) that claim the opposite, namely that carbon fibers do dampen the vibrations. In reality, we shall not mistake  the normal deformations of the ski under load (which are indeed  reduced by a large use of carbon fibers) for the vibrations, which are high frequency oscillations generated by the dynamic behavior of the ski-skier system on the snow. In practice, if you test a ski with a high carbon fiber content, you can immediately feel that it “moves less” (deformations are of reduced amplitude), but in fact it vibrates more (the high frequency  vibrations are absorbed less effectively or not at all).

As for the lifetime of our skis or snowboards, generally the stresses applied  remain well below the breaking load of the materials used in the structure. However, in the case of carbon fibers, an exceptional load (for example, when landing on hard snow after a jump) could cause a brittle (and therefore sudden) fracture in the carbon sheet. With Titanal sheets, on the other hand, there would be plastic deformation (with energy absorption) before any possible fracture.

Application of the top sheet at the handcrafted producion  facility of  Wagner Skis. Photo by B.Rasmussen

In some publications the   possibility of fatigue failure is also mentioned. This is to be excluded since the stresses in the skis are generally lower than the fatigue limit of the materials used; in practice it is unlikely that a situation of continuous cyclic loading around the fatigue limit values ​​may occur.

As for the physical and mechanical characteristics of the carbon fiber – epoxy resin composites,  with changing  temperature, there are no significant effects in the range of normal utilization (-30 ° C + 20 ° C).

The humidity of the environment and  the contact with the water contained in the snow can alter the physical properties of some polymers and the wooden core in the long term; however, these factors are of little influence on the average lifetime the skis.
On the other hand, water absorption of the composites could have an impact during the  production process at the factory, if the materials are stored for a long time in a humid environment;  however, this does not happen in a well-controlled production sites.

More important could be the effects of UV rays on composites; this is why they are always inserted inside the ski or snowboard, totally protected by the UV rays.

CONCLUSION
We say YES to the appropriate use as needed  of carbon fibers in the construction of skis and snowboards, especially for ski mountaineering, thanks to the possibility of having excellent characteristics  with a contained mass, and this even with wider skis (over 100 mm under the foot).
We say NO to an excessive use of carbon fibers only with the aim of maximum lightness, or to offer a fashionable product at unnecessarily high prices.

to return to the NEWS page
and read many articles about ski touring and other sport adventures in the Alps:
technical issues, gear reviews, mountain medicine, safety, avalanches, useful info and advice by the pros, and much more… 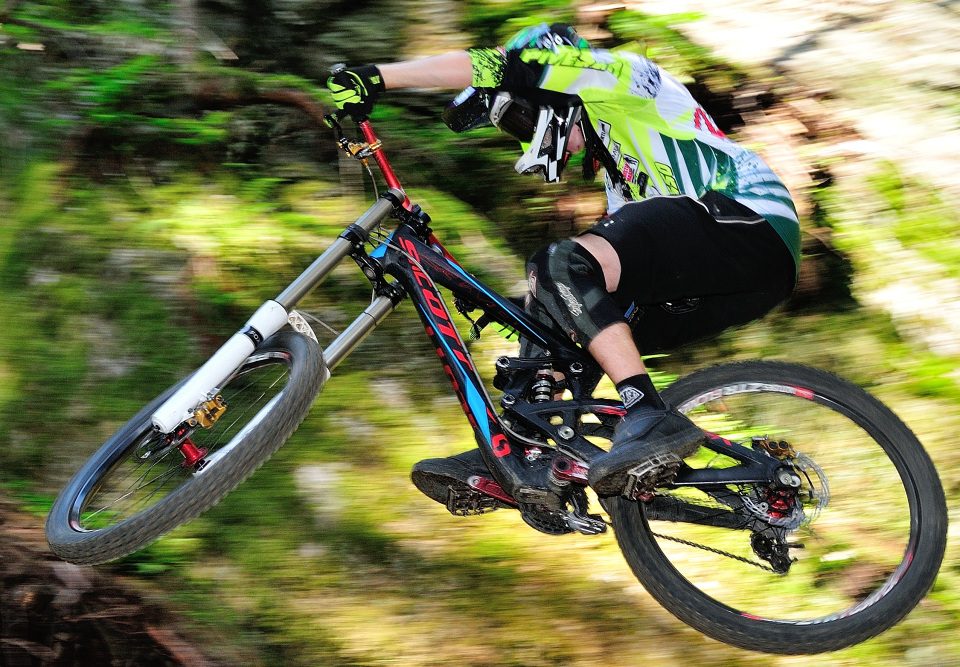 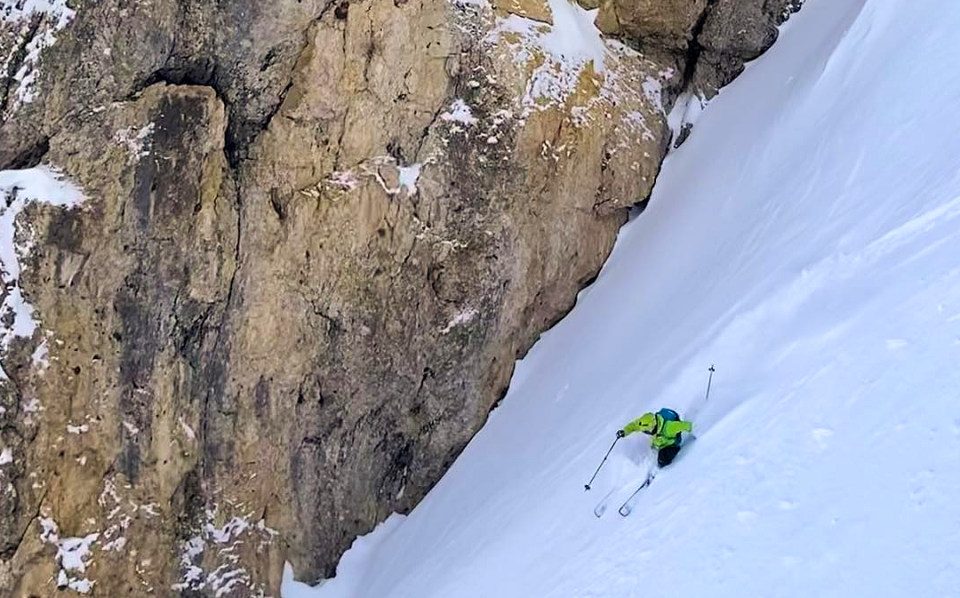 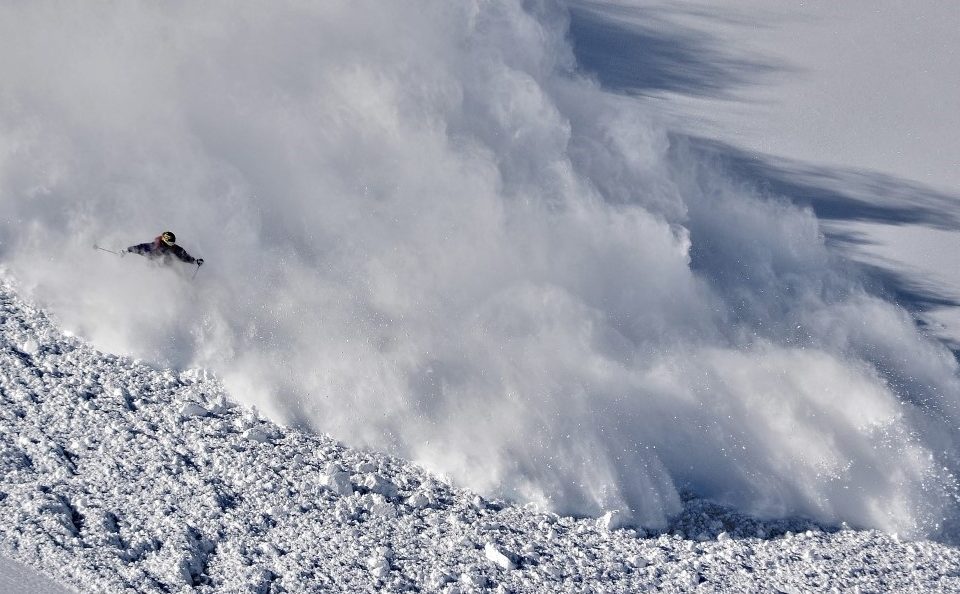 Use the options of Opt-out of your browser if you want to disable cookies.